Perceiving your own hypothesis 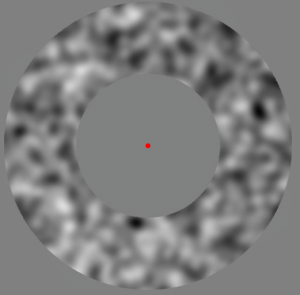 Demos of the illusion are here.
It is often thought that perceiving a colour is the result of activating colour-sensitive neurons, perceiving motion is the result of activating motion-sensitive neurons tuned to a certain speed and direction of motion, and so on. This figure and the website and paper that accompany it provide a thought-provoking counter example. When you look at the demo stimuli you see large jumps in a clockwise or anti-clockwise direction. But your brain is making up this motion entirely. There are no motion detectors tuned to these steps and there is no motion in the stimulus corresponding to these large steps. Instead, you a 'seeing' your own hypothesis.

The details are in the paper ? by Wexler et al but, as a simple analogy, think about being in a thick wood trying to spot a deer. You see a tiny flash of motion through the branches. The motion is to the left but only by a very small amount as there was only a tiny hole in the branches. However, you have a lot of evidence that the deer jumped a considerable distance (e.g. lots of noise or, in the case of the paper, a lot of image change occuring over a brief period). So, your attention moves rapidly to the left and so do your eyes, anticipating where you think the deer will appear next. You have lots of evidence that the deer jumped left, so that is what you see. That is roughly what is happening in this stimulus. There is no pattern that actually moves by the large jumps that you see, there is only a tiny 'seed' motion to encourage you to guess left or right. Your perception of motion simply corresponds to your best guess. It is a guess for which you have a lot of evidence, so the perception is quite a strong one, but the evidence is not of the type that we often imagine the brain uses, i.e. neurons firing that are tuned to particular magnitude or direction of motion. Of course, neurons of that sort often do contribute to the evidence that is responsible for a particular perception, but they have no special place in perception other than by virtue of their providing particularly pertinent evidence.

It is interesting that the jumps people perceive for a high spatial frequency pattern are smaller than those for a low spatial frequency one. Since there is no real motion corresponding to these jumps, this difference implies that the brain must 'know' the range of step sizes that can give rise to a coherent motion signal for each type of static pattern (low spatial frequency patterns are compatible with a much wider range). The confirmation of expectations of sensory consequences (i.e, in the context of the ideas discussed in these pages, landing in a particular Voronoi cell), is what gives rise to a particular perception. It can take unusual phenomena, like this one, to emphasise the role that sensory neurons normally play in perception.