Experiment by McKee et al, 2007. Participants made depth judgements relative to a surface that was either in the fixation plane (A), in a plane away at a different depth (B) or a condition physically the same as B but in which, due to the participant perceiving a false match, they perceived the stimulus to be in the fixation plane. 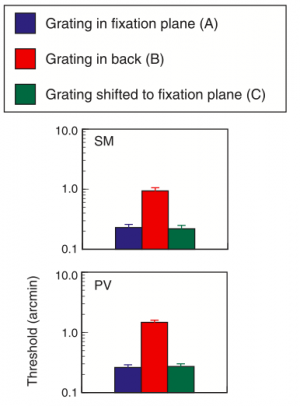 Data from McKee et al, 2012. Participants were poor at the depth discrimination task in B, as expected, but became better when they perceived the stimulus to be in the fixation plane (C). The retinal stimulus in B and C is the same.
Closely related the the discussion on anticorrelated stereograms and behaviour in relation to a single neuron is a paper by McKee et al (2007)[1]. It describes a psychophysical experiment but it bears on the issue of how a decision can be influenced by the firing rate of a neuron carrying information that is appropriate for that decision.

A pattern that repeats regularly can be perceived to lie in more than one plane, depending on which features are matched. This means that the same retinal stimulation can be associated with two different percepts. Stereoacuity is known to be much poorer for stimuli off the fixation plane. McKee et al found that when the participant's perception of the stimulus depth shifted to the fixation plane (without any movement of the eyes), stereoacuity improved to the same level that it would have been if the participant was fixating the pattern. This implies that the precise information about stereo depth was present, somewhere in the cortex, when the participant saw the stimulus as being off the fixation plane but that the information was inaccessible. There is good evidence that neurons with precise information on disparity would be firing in both cases. Cumming and Parker (2000)[2] recorded from V1 neurons that showed precise modulations in firing with changes in disparity both to the globally correct match and to an incorrect match.

The argument here is that the 'path' to these sensitive neurons is 'open' in the case of the globally correct match but not for the incorrect match. In McKee et al's experiment, whether this path is open or not depends on the match the participant makes (the depth plane the participant perceives) even when the retinal stimulus is identical. This means that the path to the sensitive neuron must be determined by the internal, 'motivational' portion of the sensory+motivational context, [math]\vec{t}[/math]. The path, as before, is a set of Voronoi cells that end up at a different Voronoi cell depending on the global match. When this match is in the fixation plane, the current sensory+motivational context, [math]\vec{r}[/math], can be moved from one Voronoi cell to another according to the firing rate of a disparity-tuned cell that is sensitive to disparities close to zero. But when the participant sees the alternative wallpaper plane (false match), the rest of the context [math]\vec{r}[/math] puts it in quite a different Voronoi cell and here the firing rate of the same disparity-tuned cell makes no difference to the perception (i.e. it does not move [math]\vec{r}[/math] from one Voronoi cell to another).