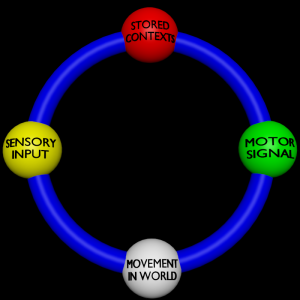 Fig A. Sensory information, including that about the internal state of the body, such as glucose level, arrives at the brain is processed and ultimately leads to a motor output or some equivalent. Usually, this leads to a motor output and hence new sensory input and, potentially, a changed internal state of the body.
As we have discussed before, neuroscience research often concentrates on the single loop from sensory input to motor output shown in the Figure A. The emphasis in these pages is on the complexity of behaviour and thought that can arise from stringing together many of these loops. “Quid pro quo”, the argument is that the operations involved in a single loop could be much more simple and mechanical than is often supposed. 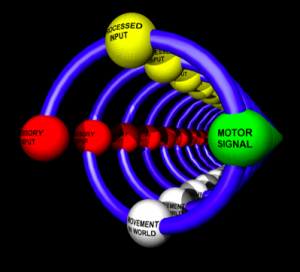 Fig B. A loop like that shown in Fig A can be followed by many more, leading to sequences of increasing complex behaviours. Here, the depth axis is time.
The spiral in Fig B shows time on the depth axis, illustrating the fact that movements in the world lead to new sensory consequences and these can be strung together in complex sequences to achieve a goal. There is no suggestion that each loop takes a particular length of time, this is only a cartoon. Nevertheless, it may be helpful to think of discrete goals, such as those described by Land et al in making a cup of tea[1] with separate sensori-motor loops identified for each fixation and saccades occurring on average 3 times a second. 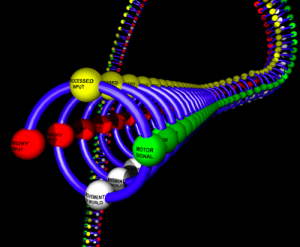 Fig C. Now the depth axis is no longer time nor any easily identifiable dimension, at least if all the elements of the helix are considered together. These slides as a movie
Fig C is even more impressionistic. Here, the spiral curves and twists in space so that time no longer corresponds to the depth axis (though it still corresponds to the long axis of the helix). The different coloured balls trace out paths in their own spaces. For example, the white balls (‘movement in the world’) could show how the 6 dof position (location and rotation) of an eye changes as the observer moves, i.e. this is a path in [math]\vec{r}\in\mathbb{R}^6[/math] space. On the other hand, the yellow balls, which in the present context can be taken as a representation of the current sensory+motivational state (vector [math]\vec{c}[/math] in the notation set out earlier), trace out a path in a much higher dimensional space, e.g. [math]\vec{r}\in\mathbb{R}^{10^{10}}[/math].

The purpose of this cartoon is the emphasise the close link between the inner and outer worlds. Seen from afar, there is a single thread, twisting and turning through some space. For sure, looked at up close, we can see separate balls so that ‘movement in the world’ and ‘processed sensory+motivational input’ become distinguishable, but from a distance only the single helix is visible and it is at this level that we should try to understand complex behaviour.

For most animals, and a for a large part of human behaviour, it is easiest to observe the twists and turns of this helix by monitoring behaviour. If there is a motor output for each loop then it is a great deal easier to track the person’s movements than it is to follow the processed sensory+motivational input (\[math]vec{c}[/math] in Notation) moving through a high dimensional space. Humans think, they plan their actions, and presumably this involves travelling down paths like Fig C but with the motor output suppressed (there are some tricky issues to consider when removing the world from the loop). The assumption made in these pages is that the paths followed by the processed sensory+motivational state ([math]\vec{c}[/math]) are similar the cases of planning and executing an action; the twists and turns through sensory+motivational space are much the same, even when the observer is imagining rather than carrying out the complex behaviour.