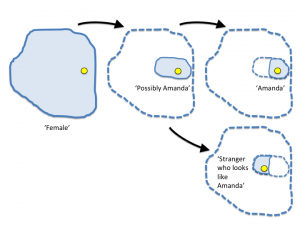 As a person walks towards you, increasing visual detail becomes available allowing finer categorisation. The current sensory+motivational context moves along a path: two paths are shown here ending up with two alternative conclusions.
A person far off is walking towards you. Initially, you can make out that their gender (for the sake of the present example, let us assume this is just from their facial features). At this stage you have only very coarse scale visual information (where scale is defined relative to the visual angle of the face). As the woman moves closer, you can distinguish more features, enough to rule out many people you know but still compatible with it being, say, Amanda. Finally, at a sufficiently close range, you can rule out that it is Amanda and you are sure you have not met this person before (see Figure)See discussion.

The cell labelled as 'Amanda' in the figure could be thought of as being a subset of the cell labelled 'Female' (and the dashed lines encourage this interpretation) but that is not an accurate description. In recognising the face as either 'Amanda' or 'Stranger who looks like Amanda', the sensory+motivational context moves from one cell to another and then another.

Note that when you see any face, even one flashed up on a screen, the sensory+motivational context is likely to move along a path like the one described here. Images are seen first at a very coarse scale (e.g in the first 10 ms of viewing) then at increasingly fine scales (e.g up to 250 ms) so the path through image space is very similar to that obtained by walking towards a person[1]