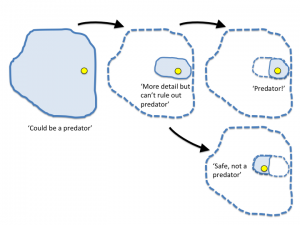 On the left, a coarse scale image or otherwise impoverished sensory input is compatible with the presence of a predator. As more information arrives (e.g. fine scale visual information), the current sensory+motivational state moves. The Voronoi cell shown in the centre is compatible with a smaller set of possible scenes and, by the time even more information has arrived (on the right), it is possible to determine whether the current state should lead to a flight response or not. Note that, as with the earlier face example, the fact that the Voronoi cells illustrated here are drawn within the boundary of the 'parent' cell is simply a limitation of using 2-dimensions to draw a high dimensional surface. The Vornonoi cells are separate but, projected down onto the hyperplane of the parent (e.g. coarse scale information present but not yet any fine scale information) the subdivisions shown here are appropriate.
Bayesian approaches have been very successful in explaining a range of perceptual and motor phenomena[1][2]. Probability is central to Bayesian analysis but it has not been mentioned in connection with the idea described in these pages. Nevertheless, there are many similarities between the two approaches.

One key element of a Bayesian approach is that the 'answer' (e.g. an interpretation of a visual scene) comes from a limited set of pre-defined possibilities. The ideas described here, in particular the limited set of stored sensory+motivational contexts, are closely related. A second key element concerns the different responses to rich or sparse sensory information. When sensory information is poor, an observer's prior expectation dominates their response. Given a richer sensory input they are able to discriminate between scenes that would be indistinguishable on the basis of the poor sensory data alone and hence their prior expectations play much less of a role. This approach is based on sound probablistic principles and has proved hugely successful in computer vision[3].

The representation described in these pages can have much the same characteristics as a Bayesian one even though the operations are described differently. A useful example was introduced earlier in relation to recognising a face. A person gradually walked towards the observer or, in another example, fine scale detail became available over the first 250ms of viewing a stimulus. The change that occurs when extra, discriminative information becomes available can be understood in terms of a movement of the current sensory+motivational state from one Voronoi cell to another. The figure on this page shows a slightly adapted version of the previous version. Here, a person reacts to a novel image that is compatible with there being a predator in the scene. Then, over the first 250ms of viewing, the person gains sufficient sensory information to reject that hypothesis. The 'prior' interpretation in this example, i.e. the action associated with the initial Voronoi cell, is to prepare to flee. When extra information arrives that allows the sensory data to be discriminated from other possibilities, including the predator Voronoi cell, the response changes and the 'prior' is over-ridden.

What is doing the work here, to replace all the calculations of probabilities that are carried out in a Bayesian account (prior, likelihood and loss function)? There is an assumption that the boundaries of the Voronoi cells are known in advance, built up through experience. If these boundaries are appropriate, the suggestion is, then the resultant behaviour may appear similar (from the outside) to an agent operating on Bayesian principles.