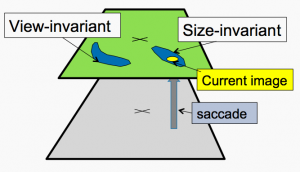 The green plane shows the set of images that can be obtained by an observer fixating a particular object in the scene, whose location is marked by a cross. One point on the plane corresponds to a single image, with the two dimensions of the plane corresponding to two dimensions of translation of the optic centre (observer). Torsion is assumed to be fixed. A saccade would take the current image (yellow dot) onto a different plane (e.g. grey to green). Receptive fields are shown in blue for a size-invariant neuron[1] and a view-independent neuron[2]. The receptive field of a supposed 'spatial view cell'[3]in the primate hippocampus would occupy the whole plane.

Similar to the figure above but illustrating changes to which the dorsal stream is sensitive. Rather than tiling the plane with receptive fields, the dorsal stream signals motion across it. Neurons respond to image expansion[4] and optic flow consistent with lateral head movement[5][6]

Neural receptive fields are often described in terms of the region of the visual field (or the retina) that influences the firing rate of the cell. A different way to describe receptive fields, one that is especially applicable for neurons higher up in the visual pathway, is in terms of the set of images that influences their firing rate. The first figure shows this for two neurons in the ventral stream. The ventral stream contains neurons that tend to respond in a similar way despite changes in viewpoint (movement of the observer). The dorsal stream, on the other hand, contains neurons that are exquisitely sensitive to changes in an image, particularly those that are caused by movement of the observer (e.g. their eyes, head or hand) independent of the nature of the scene. These two systems, then, provide complementary information that helps navigation across a set of image surfaces.

Signals from these two streams can be concatenated to provide a visual component of the current sensory+motivational context.